Book review: You Could Do Something Amazing With Your Life [You Are Raoul Moat], Andrew Hankinson, Scribe, 2016 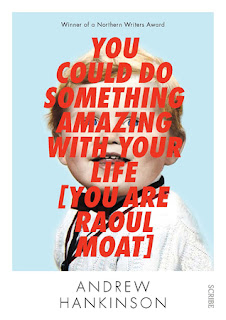 A second-person present-tense (mostly) account of the last eight days of Raoul Moat, who in 2010 murdered the boyfriend of his ex-girlfriend, shot his ex-girlfriend and then went on the run before killing himself, and while on the run shot in the head a police officer who subsequently also killed himself.

So a strange book, then. Hankinson's reason for using the second-person present tense wasn't entirely clear. The only other books I've read in that tense are those adventure gamebooks for kids that are chopped up into randomly-arranged sections and require you to choose between different sections to read next to determine your fate. Those have the effect of making you feel that you're actually involved in the action, whereas here that seemed only minimally true, and mostly only in the first chapter, which is how Moat ("you") filled out a psychotherapy questionnaire two years prior to his rampage. ("It asks about your family history. You write that your father is UNKNOWN.")

After the first chapter, the book reads more like an account for Moat, as though he might read it in the afterlife. This is particularly true where Hankinson adds square-bracketed inserts containing information not sourced from Moat's own accounts (the parts that are more-or-less transcripts of those accounts are in the first person): "Probably it's a relationship through the internet, something on Facebook [she met him while he was handing out flyers for karate lessons]."

It could simply be that the choice of tense was intended to intrigue, and it did intrigue me: I don't often read true crime, but everything about this book is intended to intrigue, from the title and its length to the cover, which is simply that lengthy title superimposed over a childhood photo of Moat in uppercase block red caps. The cover caught my eye from across the bookshop, and the tense hooked me in further.

But it could well also be that the tense is indeed intended to work like in those adventure gamebooks, placing you firmly in the action and, in this case, making you empathise with Moat. I was unclear whether the reader was intended to empathise with Moat or not, but I suspect Hankinson's intention was to let the reader decide that for themselves but to do everything possible to give them the full facts and feelings necessary to make that choice, including by putting them in Moat's shoes as far as possible. And if that was indeed his intention, I'd say he succeeded pretty well: the account does strike me as mostly impartial, although the placement of those inserts is an authorial choice, and they do slowly build to a rather negative accretion: "I never jumped on Sam's belly [she says you did]. There's been pushing and shoving ... [she says you dragged her by the hair and throttled her].

Possibly the reader isn't expected to sympathise with a man who murdered one person and shot two others, and who was convicted of hitting a child, but Moat's accounts of alleged police harassment, however paranoid and delusional, and of childhood bullying and of absent family members do evoke sympathy, and I think that probably is intentional. As if for further balance, at the end there's a rather heart-tugging account of how one of Moat's relatives did apparently try hard to be involved in his life when Moat was a child, but also a couple of rare leakings of authorial judgement: "You did that." "You killed him."

The treatment is unusual and impressive and thought-provoking, and the reading experience perhaps unique; certainly uncommon. It isn't an enjoyable experience, though. At best it's sordid (and I do mean at best, since making the reader feel sordid is surely part of the point) but at worst it's inane: there's a lot of repetition, and quite a lot of the sentences are sentences like: "Sean goes shopping." "You eat a burger." "Sean drives to Blythe."

(Sean was a friend of Moat's. One interesting aspect of this crime that the book's format does not allow to be explored is how Moat was able to convince two people to assist him on his rampage, who subsequently received lengthy jail sentences. There was a pretense that they were held hostage, but actually they were willing accomplices, which does raise the question of their motives. Were they extremely close friends, or merely also murderous characters themselves? How rare are such friendships?)

So not a great read as you'd typically define one, but strange, compelling, uncomfortable, provocative but controlled and apparently fair-handed. Challenging, in other words. Accomplished, in reviewer-speak.
Posted by @CLANicholson at 14:08