Book review: How to Live in the City, Hugo Macdonald, Macmillan, 2016 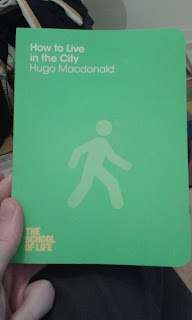 There's a chapter in How to Live in the City called How to be Hard and Soft. I'd hoped before starting the book that this chapter might cover aspects of urban living that are seldom acknowledged, like whether it's a good idea to make eye contact with strangers, whether you should give money directly to people who beg you for it, whether you should respond to substanced-up geezers who start talking at you on the night bus, how you should deal with neighbours practicing their MCing at 4 in the morning, how not to be psychologically scarred when removing human shit from your doorstep, whether you should try to rouse the guy lying maybe lifelessly on the pavement at the end of your street, etc etc.

But How to Live in the City is a self-help book from the Alain de Botton-founded School of Life, and as such it's more concerned with things like - that old standby - how to retain your zen when your commute involves trying to avert your nose from the armpits of fellow tube-users, and how to find time for yourself when there's just so much to do.

To be fair, I should have guessed as much from the cover. And more importantly, HtLitC is framed in the context of not only the opportunities but also the costs of urban living, opening and closing with a quote that warns "big cities have difficulties in abundance".

But even if I shouldn't expect grit from The School of Life, it would have been nice to have more personality from Macdonald - or rather, from his writing, since he seems like an interesting bloke. His affable, at-times blog-like, writing makes HtLitC an easy read, but far from a distinctive one.

And though the advice seems largely sound, albeit geared towards the affluent, there's little in HtLitC that you won't already have read elsewhere or thought of yourself if you're at all reflexive.

That said, it rarely hurts to be reminded of good advice, and Macdonald is an agreeable enough benevolent spirit - and a well-read one, if a little too ready to recommend the works of former mentors and employers. It's hard to be too critical of a book that exhorts you to be a radiator of warmth rather than a drain of life, and impossible to dislike an author who uses an addendum to recommend both Madonna's Ray of Light album and Charlie Brooker's Black Mirror TV series - I hope at least a few of the book's target audience give that latter a try...

Besides, Macdonald seems better at life than me, so what do I know?