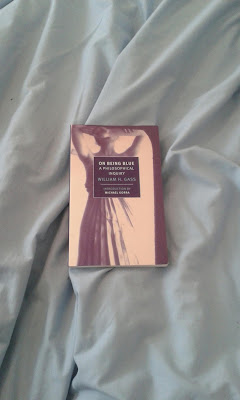 Towards the end of On Being Blue, Gass talks about the ability of literature to let us see inside another's head. He's clearly enamored of the idea, as OBB reads like the unexpurgated laying down of a stream of consciousness - and not just any consciousness, but rather one caught up in a dream or fever state. It's messy. It's as poetic as it is incoherent. As insightful as it is baffling.

It's like five short essays jumbled together and broken apart like torn leaves in a tossed salad, where for a couple of mouthfuls you're enjoying chicory, and then suddenly you're eating red chard. And then what's with the orange segments? Or like if wave foam momentarily resembled something, and then almost instantly became something else.

Which could be great, if there was substance to the shambles if not method to the madness. But having read 90-odd pages I've gained ... what? The knowledge that sex is difficult to write about? That philosophy can be unsatisfying?

Gass also says "you might expect writers to love their words, although the truth is that writers usually love whatever their words represent", and I didn't get the impression this was a criticism, but with Gass you suspect the opposite is true, and that words - like colours in a painting - are selected based on how they work together to convey not so much meaning but more sensation, like a drop of hot wax on a nipple is all the more intense when it comes after the frigid tracing of an ice cube.

Which would be fine over 90 lines, but it's less appealing over 90 pages.

Posted by @CLANicholson at 09:52 No comments:

Picture the scene: you're a neighbour of Johnny Mercer, Conservative MP for Plymouth Moor View. He's just finished assembling a pergola in his back garden, and he'd appreciate your help threading some clematis through it. He urges you to clamber on top and get your hands dirty.

"Is it safe?", you ask, worriedly eyeing up the flimsy bamboo and clumsy-looking joints.

Johnny appeared on Channel 4 News tonight, to comment on a piece they ran about the UK government returning asylum seekers to what they say are safe areas of Afghanistan.

Asked by Jon Snow and Dr Liza Schuster whether regions like Kabul can really be considered safe when there are multiple attacks there every week, Johnny, who sits on the Commons Defence Select Committee and served three tours of Afghanistan, replied:

"It depends how you would define that term, safe. You cannot take some of their best people out and expect that country to rebuild."

That is, according to Johnny, whether something is "safe" is conditional. If there's work to be done, bombs on buses don't count as hazardous. Stop that cowering and hop to your commute.

"We really have to define what is safe in Afghanistan," he repeated, adding: "It's different to what's safe over here."

It had me imagining scenarios like the one above, and put me in mind of both the blood-curdling dentist scene from Marathon Man (not for the faint-hearted):

And Whoopi Goldberg's infamous "I don't believe it was rape rape" defence of Roman Polanski's having raped a child.

"Perfectly safe," he replies with a smile.

"But is it safe safe?" you ask nervously.