Trial by pen and paper


Next week, the cartoonist Zunar will begin standing trial on nine counts of poking fun at the Malaysian government. His sentence, if he's found guilty, could be anything up to 43 years.

Zunar doesn't call the Malaysian government "the government": he calls it "the regime" or "the cartoon government". The same party - Parti Perikatan, now called Barisan Nasional - has been in power since 1955.

Hence in Malaysia, , Zunar says, the job of political cartoonists is "to fight, to push for reform". "My philosophy is: why pinch when you can punch?", he says.

Nor, of course, does the government call the charges ranged against Zunar "poking fun". Probably, though, it would take even them a while to remember the official terms: Zunar says that initially there was just one charge against him, then eight more appeared as if from nowhere.

Zunar isn't in Malaysia at the time of writing: he's in London. On 14 May he took part in an event organised by the Index on Censorship, a discussion with the English cartoonist Martin Rowson at the Free Word Centre in Farringdon.

Rowson asked Zunar why he's prepared to return to Malaysia to stand trial; why not just stay in the UK?

"For me, talent is not a gift. It's a responsibility," Zunar said. "It's very important for a political cartoonist like me to fight for my people. The trial will expose just how cartoon this government can be."

Zunar asked Rowson and another English cartoonist who was present, Steve Bell, whether, particularly in light of the Charlie Hebdo massacre, they would draw cartoons of the prophet Mohammed. Both said they had pitched ideas to their respective employers in the immediate aftermath of the massacre, but that the publications had, after much consideration, rejected the ideas. Rowson said that for the 48 hours after the cartoon he did draw was published, one of himself slumped at his desk, he received a torrent of accusations of cowardice from internet users hiding safely behind their anonymity.

For Bell, though, the compulsion to draw the prophet is not strong. "What's really important is that we choose our targets: I won't let some twat who's got a bee in his bonnet about Mohammed chose my targets - I want that job", he says.

Rowson followed by saying that the reason he is a cartoonist is that he is himself offended. "I'm offended by the very idea that people think anyone can place themselves in a position of power over me and the rest of us," he said.

Zunar finished by saying that everybody can do their part to highlight abuses. "If you can write, write; if you can speak, speak; if you can blog, blog", he said. "We are all just like a drop of water in the ocean. But if we combine, we can create a tsunami."

Zunar can be found on Twitter at @zunarkartunis. The hashtag for the event and to follow the proceedings of the Malaysian government's trial is #freezunar.

Posted by @CLANicholson at 14:38 No comments: 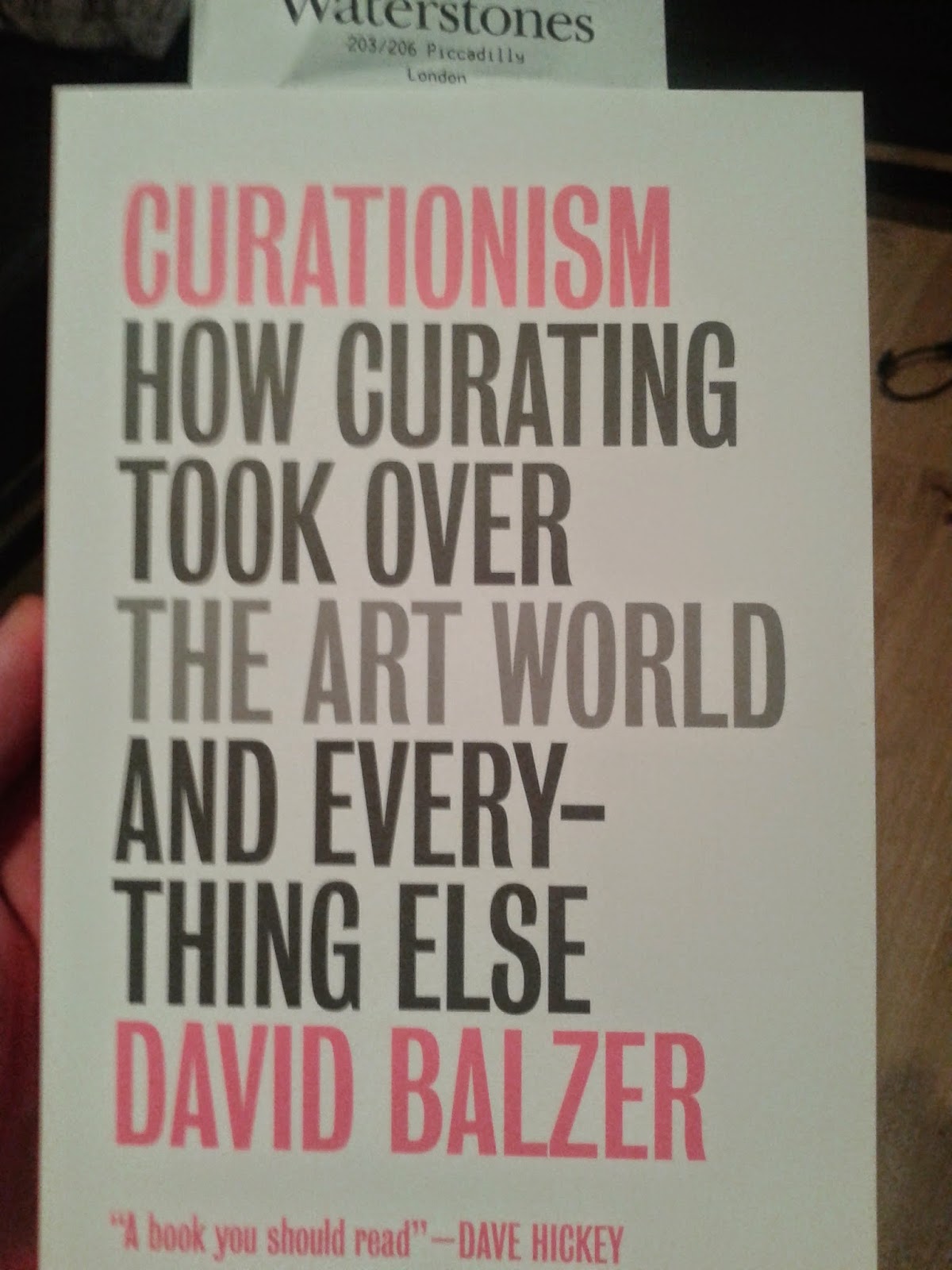 In 40 not-very-densely-typed pages of Curationism (Pluto Press), David Balzer manages to undermine one of my more firmly entrenched ideas of myself, as well as my idealisation of work and one of my burgeoning fantasies. He also drags into the light one unpleasant truth I hadn't fully acknowledged.

These are, in turn:
The ideas in Curationism may not all originate with Balzer, but no matter: he has - argh, don't, don't; yes, yes, I'm gonna - curated them (and rewritten and reformulated them, obviously) very well. And, of course, they were new to me.

Curationism describes the rise of curation in the art world and, more recently, in our daily lives, and then deftly considers its prospects in each. The first 90 pages, setting out the history of the subject matter, are not so deft as the final 40, but in keeping the whole short and ending so strongly Balzer gives us a book that feels timely, informative and insightful.

Perhaps most tellingly, he made me want to spend less time reading articles about contemporary culture online and more time reading well written and edited short books about it instead.

I still followed him on Twitter, though.
Posted by @CLANicholson at 13:43 No comments: