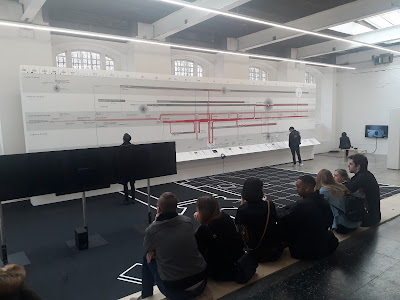 Legal cases usually allow both legal teams - prosecution and defence, in criminal cases - to examine and make use of the relevant evidence. But while governments have their own evidence-gathering experts and the money and knowledge to commission additional external expertise if needed, the people and organisations that might find themselves having to defend themselves against or challenge the state generally don't have access to these kinds of resources.

That's where Forensic Architecture comes in. It's an "independent research agency based at Goldsmiths, University of London", according to London's Institute of Contemporary Arts, which is showing an exhibition of the agency's work.

The ICA's website says: "Forensic Architecture is not only the name of the agency but a form of investigative practice that traverses architectural, journalistic, legal and political fields, and moves from theoretical examination to practical application."

Actually, if the exhibition is a reliable guide, then the agency practices very little architecture as most people would think of it, and really carries out research encompassing interviewing, forensic examination, reconstruction and - the area where architecture is most at play - digital and physical modelling.

They've been commissioned by non-governmental organisations and families to examine evidence relating to potential human rights abuses, crimes and state violence, including police killings, state airstrikes, and the EU's handling of the migrant crisis in the Mediterranean.

It's a fascinating subject for an exhibition, and the ICA devotes a lot of space to it, including multiple videos and charts and a recreation of the floor-plan of an internet cafe where a murder took place.

Eddy Frankel was fairly scathing in his review of the exhibition in Timeout, and he has a point when he says:

"All along the opening walls of this show are long, involved, mega-academic essays on the ‘forensics of aesthetics’ and shit like that. Is it a concession to the usual blah-blah waffle of the art world? Or is it simply an inability to condense down all the inward-looking, shoe-gazing academic theory at the heart of Forensic Architecture into something that can really connect with people? Probably a bit of both."

The section of the exhibition he highlights is interesting in flagging that aesthetics plays a part in courtroom presentations of forensic evidence even though evidence itself is supposedly straightforwardly factual, but it's a point that has minimal relevance to the case studies presented. There are also far more accessible ways of saying that the human body records evidence of the impacts of some of the things it experiences.

Furthermore, it's not always clear what, if anything, resulted from the agency's work. In some cases this is because the work is ongoing, but in others - such as the reconstruction of an airstrike - it seems to have been left out.

Likewise I had doubts about some of the findings. An increase in deaths in the Mediterranean is attributed to a specific cause, whereas it looked to me like it could have been due simply to the seasonal increase in attempted migrant crossings during the summer. A video is asserted to show a soldier pretending to discharge a shell from a rifle, when actually something that looks very much like a shell clearly ejects from the chamber.

But Forensic Architecture is, as I said, a fascinating agency that seems to help provide a counterpoint, in situations of a massive power imbalance, to the ability of governments to control the generation of evidence and expert analysis. And this exhibition provides a substantial, if at times somewhat confusing and frustrating, insight into how it does that.

It's well worth dropping by.
Posted by @CLANicholson at 10:47 No comments:

Art is at least as much about what's left out as what's included. A sketch of someone can be all the more moving for excluding their surroundings; a photograph can highlight neglected details by zooming in on parts of a whole.

This also mirrors how the human eye and mind work. Our eyes can focus on only one small area at once, while our brain generally limits our attention to what matters most at any given moment, filtering out the rest.

But this is not how the world really is, and that's part of the point of the Andreas Gursky works currently on display at London's Hayward Gallery.

Many of Gursky's works are very large, and depict monumental scenes of people interacting with their environment on an epic scale.

More than that, he uses post-production techniques to splice together multiple images of the same scene, so that he can capture and reproduce more of it - and all with the same sharpness of focus, rather than with any blurring, curving or fading away at the edges.

This is not how we perceive the world, and yet it represents the world as it really is. Objects we aren't focusing on at any given time don't really become blurry, just as background noise doesn't really reduce in volume as we eavesdrop on a particular conversation - it only seems that way to us. In reality these things carry on as before, just as big or small, just as important or unimportant, regardless of who's looking.

Similarly, the things that seem monumental to us are actually hardly any more or less so than the things that seem inconsequential. The different threads in a carpet, as depicted abstractly in one Gursky photograph, are barely any different in size to the glacier and mountains depicted in another if considered on the scale of subatomic particles or the distances between galaxies.

Even when Gursky takes more egregious artistic liberties, such as when he manipulates the capture of two Formula 1 pit crews to make the team members more multitudinous and their exertions seem simultaneous with each other, he gets closer to the real truth by doing so. A single snapshot of a pit stop wouldn't convey the frantic speed of the action or the competitive importance of it as brilliantly as the hyperreal, toyed-with version.

In collapsing several moments and perspectives into a single work, like David Hockney did with his Polaroid collages, Gursky gets closer to the reality of multidimensional spacetime.

Not that Gursky always wants to portray everything as it really exists in the world. His depiction of the Bahrain grand prix circuit chops the track up into multiple kaleidoscopic pieces that lead to nowhere, while the one of the pit crews intensely isolates the cars and people in a sea of black space like a computer game emphasising a highlighted character or object selection from an array of options.

But even here one could argue that Gursky is getting closer to the truth. Even if, in the real world, photons fall from the sun onto surfaces at the same rate regardless of what those surfaces are made of or how they got there, likewise raindrops and wind, and even if all materials are ultimately made up of the same subatomic stuff, the deeper truth is that some things are different by virtue of their origin or emotional resonances. A Formula 1 car is different to a mountain because of the thousands of hours of human effort and ingenuity that have gone into its design and manufacture, while a tarmac loop in the desert deserves attention for the sheer absurdity of its having been forced into being.

Gursky somehow captures that. One of the many things he does with his pieces - as well as documenting the interplay and mutual impacts of people and the environment - is make us think differently about the world and our place in it. And that, again, is what art - some great art, if not all - is about.
Posted by @CLANicholson at 15:57 No comments: