What should we do?

What should we do, eh?

What should we do about our depression, anxiety and loneliness?

Now that a climate change-denying, disability-mocking, sexist, racist liar has been elected the most powerful person on Earth, we should probably spend the next four years fighting political fires. But what about after that?

As I wrote about here, Christopher Lasch thought we should establish systems of education, government and life in general that empower people, since small accomplishments achieved in local communities would involve the fostering of human connections and result in the satisfaction of jobs well done.

But it does rely on there being a sufficient number of appropriately difficult challenges for us to solve, forever.

Curing all diseases, alleviating all poverty and ending all wars and oppression are pretty decent goals that we're already trying hard as a species to achieve. Well, we're trying a little bit, anyway. But is it possible for all of us to make meaningful contributions to those tasks? I doubt it.

Preventing harmful climate change is probably the next-most pressing issue, and we can certainly all do our bit there, but can we do much as local communities? Again, I don't see it. Likewise preventing biodiversity loss.

Besides, while we certainly should be trying to repair the damage we've wrought on the planet, merely undoing our previous crimes feels like a waste of human potential. Think of it this way: if all you can say on your deathbed is that you did no harm, will that feel like a life well lived? You may as well have stayed in bed the whole time.

We need something else.

I don't know yet.

The best ideas I can come up with are a Star Trek-like interplanetary policing role and some kind of galactic artwork of the sort Fry carries out for Leela in an episode of Futurama: 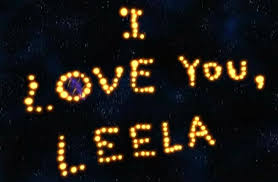 But the first of those looks like a bit of a stretch given that we've proved to be pretty shit at even terrestrial policing, and the second would probably be an even more hideous misuse of our powers than any of the fuckups we've yet managed here on Earth (I'm reminded of a moment in one of the Red Dwarf books when a space crew rearranges the stars into an advert for Pepsi)... Oh, and they're both technologically impossible, too.

So I'm stumped for now. But it seems worth thinking about.
Posted by @CLANicholson at 09:14 No comments:

The Culture of Narcissism posits that when we tumble forth from the bliss-like satisfaction of the womb into the cold hard world, where not all of our needs are satisfied, we develop the capacity for anxiety; and that because the modern advertising industry keeps us in a state of constant desire, and because the bureaucratic nature of modern life makes us feel, and indeed often makes us in fact, helpless to act in many of the ways we wish to, we're not able to achieve or be satisfied with the minor victories that ought to be all we need to live fulfilling lives; and that we've therefore become creatures of anxiety and narcissism (as defined by psychotherapy as opposed to general usage) who vacillate between feelings of implausible entitlement and bewildered, depressed dissatisfaction; and that we therefore need to build a system of education and government that empowers people rather than swaddling and failing them.

Which is all pretty fucking good. Sadly it's mixed up with a fair dollop of Freudian codswallop about Oedipal complexes and castration fantasies and all that guff, but if you can hold your nose through that nonsense there's a great deal to like.

Too much to quote, in fact, although one turn of phrase in particular I thought was magnificent:

"Since the society has no future, it makes sense to live only for the moment [...] to become connoisseurs of our own decadence."

If that's not the perfect description for our modern inclination to do things like down 14 pints, vomit in our own lap and then brag about it to our friends, I'm a mongoose.

It's also highly pertinent to our recent fondness for voting for ludicrous quick fixes to complex problems, as I've written about here.
Posted by @CLANicholson at 08:14 No comments:

Whatever you think about democracy, it tells us more about a nation's people - through how they vote - than any other system of government in use today.

So what do the UK's EU referendum and the US presidential election - the two most significant voting opportunities of 2016 - tell us about the British, the Americans and the western / developed world in general?

The Leave campaign won in the UK, leaning heavily on the slogan 'Take Back Control'. The idea that decisions about the UK should be taken in the UK was the number one motivation for Leave voters.

Trump won in the US, making similar use of the phrase 'Make America Great Again'. The man himself said that a Trump victory would be "Brexit plus plus plus".

What do both of these campaigns have in common? They leverage a feeling or fear of a loss of control.

Why would British or American people feel they've lost control?

Britain has relinquished an empire and its position as the world's primary manufacturing, military and political power, but most of that happened before most of today's voters were even born.

America, the replacement imperialist, is seeing rising competition from a resurgent China, but it remains the world's dominant superpower and is likely to stay such for decades.

Economic growth in the UK at the time of the referendum was the highest in the G7 group of the world's leading economies, while the US weathered the storm of the 2008 global financial crisis better than probably any other leading economy.

So what's the problem?

Many point to growing inequality, with the income of the top 1% of earners rising to hundreds of times that of the average earner.

But Americans have decided the best solution for what ails them is to elect a politically inexperienced billionaire with a history of off-shoring jobs from his own companies, while Brits have voted for a course of action that will probably make individuals and the country less well off and leave British companies having to abide by EU rules while no longer having a say in what those rules should be.

Both outcomes demonstrate the victory of easy promises of greater control over reasoned argument. How could this happen?

Likewise, Americans decided to vote not for "the most experienced presidential candidate in history" but for someone who has never held political office.

In his 1979 book The Culture of Narcissism: American Life in an Age of Diminishing Expectations, Christopher Lasch quotes Ludwig von Mises as follows:

"Bureaucratic collectivism [...] undermines the "cool rationality and objectivity of capitalist relations" and renders the "plain citizen" dependent on the "professional propagandist of bureaucratisation", who confuses the citizen with his "empty catchwords" and esoteric obfuscation."

In other words, modern bureaucratic society (and what commoner objection is there against the EU than that it's overly bureaucratic?) and its 'experts' have made people dependent and confused.

"Our growing dependence on technologies no one seems to understand or control has given rise to feelings of powerlessness and victimization."

So we're not only dependent and confused, we're also afraid and angry.

And it's not only that we're materially worse off and more dependent:

"Our society tends either to devalue small comforts or else to expect too much of them. Our standards of "creative, meaningful work" are too exalted to survive disappointment. [...] At the same time that our society makes it more and more difficult to find satisfaction in love and work, it surrounds the individual with manufactured fantasies of total gratification. [...] We demand too much of life, too little of ourselves."

Lasch is referring to promises of the absence of physical pain, lavish lifestyles, celebrity and adulation, but it's easy to see parallels with grandiose promises of 'making America great again' and 'taking back control' - or with that so telling phrase of Boris Johnson's: "I'm pro having my cake and pro eating it."

"A reassertion of "common sense", according to Mises, will "prevent man from falling prey" to the "illusory fantasies" of professional bureaucrats. But common sense is not enough. In order to break the existing pattern of dependence and put an end to the erosion of competence, citizens will have to take the solution to their problems into their own hands. They will have to create their own "communities of competence."

Lasch was writing in 1979, when free market liberalisation and globalisation were only just being ramped up by Reagan and Thatcher. The problems he wrote about are much bigger today.

But at the same time that globalisation has split developed nations into the haves and have lesses, it's also lifted hundreds of millions of people in developing nations out of genuine poverty, while placing ever greater pressures on the environment.

And it's shown millions of people in Eastern Europe, Mexico, North Africa and the Middle East the kind of lives that people in the west are so desperate to protect, having lucked into them via the lottery of birth.

So while the solution Lasch advocates of greater personal and civic autonomy might well be the right one, we're also going to have to pay even greater heed to another of his points:

"The best hope of emotional maturity, then [...] lies in acceptance of our limits. The world does not exist merely to satisfy our own desires; it is a world in which we can find pleasure and meaning, once we recognise that others too have a right to these goods."
Posted by @CLANicholson at 03:47 No comments: