I've written before about how hangovers can be conducive to thinking. I still don't know how well explored this has been by others elsewhere, but I was pleased to see Tom Hodgkinson ask Louis Theroux about it in the February 2016 issue of The Idler, which Tom edits.

Tom asks: "What about drinking and being hungover? You know how people say, and we probably all feel it, work can be quite fun when you're hungover. You can be more creative. Like some kind of barrier's been released."

Louis doesn't really address the question, instead talking about times when he feels he's been sub-par due to being hungover. I wonder whether Tom has written about it before...?

It's a pretty good interview, anyway. This is the first time I've read The Idler, but probably not the last.

Posted by @CLANicholson at 03:39 No comments:

I had an imaginary conversation with a friend this morning (this guy), in which he accused me of having a high opinion of all my blog posts.

While brushing my teeth, I mentally explained that most of the time when I start writing a post I don't know how it's going to develop or how it's going to end, as was the case yesterday. I write for a living at the moment, and in doing that I often organise my thoughts as much by writing the piece as by thinking about it beforehand. The same is true for my blog posts.

"It's not that I decide in advance that an idea is worth the effort of writing the post," I imagined I told him: "It's that I have an idea, write the post, and then decide whether the post is so bad that clicking 'publish' would be worse than the pain of not publishing something that's now been written."

He didn't get to reply: imaginer's prerogative.
Posted by @CLANicholson at 03:00 No comments:

Since taking a big pay cut a little over a year ago, I've been keeping track of my spending much more closely.

After tax, rent and bills, I have about £7k left per year. That's about £20 a day, and £20 a day is how I think of it when I'm budgeting. Every day I wake up and add £20 to the running total of what I've saved - or subtract that amount from my arrears. Then throughout the day I subtract whatever I spend.

There are alternatives. I could do just one addition on January 1st and only subtractions for the next 365 days. But that would be hard to benchmark: I'd have to keep calculating how much I should have left at this time of year so that I could hold it up against what I actually had. It would also be depressing to watch my total do nothing but shrink for a whole year.

Or I could keep a running total like I do now, but add 83p every hour. That would be pretty labour-intensive though, and I'd be constantly forgetting my total.

So what I do is probably what most people in my position do. But there are consequences.

For example, for the most part I try to keep within my daily budget, only really letting that slide if I'm drinking. (Alcohol is so expensive it would be impossible to keep within my budget and stay out more than a couple of hours, so the budget goes out the window in favour of a vague attempt at not going TOO overboard.)

That means I tend to only buy things that cost about £12 or less - about the amount I have left per day after food and incidentals. Sensible you might think for someone without much money, but somewhat irrational given that I could equally well think of myself as having £40 for every 48 hours, or £140 for every week, the latter of which might make me feel free to buy anything up to about £80 so long as I bought nothing else non-essential that week. I could live like a monk for six and a half days, then splurge like a tourist in one orgiastic evening.

If I thought of myself as having 83p an hour, would I limit myself to frivolous purchases of only about 50p at a time - like cans of Coke and Kinder eggs? If by the minute, penny sweets?

If I lived by the year, would it be a big holiday?

By the lifetime, a car?

I don't know. I live by the day, so I spend my money on books, exhibitions and the occasional cake. I don't take holidays and I dress only in Christmas presents. I'm usually home by five on a Saturday.

Book review: How to See the World, Nicholas Mirzoeff, Pelican, 2015 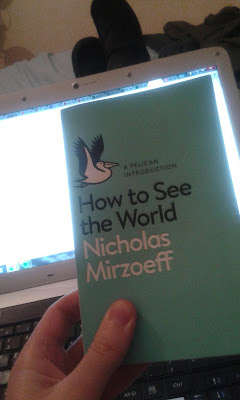 About two-thirds of the way through How to See the World, I thought the opening of my review was going to go something like:

"If you were to take How to See the World as an embodiment of its own instruction, you'd think that instruction was: incoherently. Mirzoeff never sets out his intentions, the book veers from one topic to the next and it's not until page 220 that you first come across any directions for viewing the world..."

I would have meant to be disparaging, obviously.

But then I started to make sense of it, and when I finished the book I thought I'd better go back and flick through the introduction again just to make sure Mirzoeff had indeed not set out his intentions . And it turns out he had.

So am I wasting your time by telling you this? I hope not.

I think it's informative that I managed to forget or not process what I'd read in the introduction, and I stand by the gist of my one-word summary. Only "incoherent" might be a bit strong: disjointed might be better. And I'm not sure that the book's disjointedness isn't intentional...

You see, part of the basis for Mirzoeff's instruction is that the world is too big and too complex to be seen clearly, and part of the instruction itself is that in order to see the world, we therefore need to piece together lots of fragments of information.

And he says as much in the introduction, using the clever metaphor of a 2012 recreation of the famous 1972 "Blue Marble" photograph of the Earth from space - the recreation being a metaphor because, rather than being a single photograph like Blue Marble, it was actually stitched together from several satellite images.

But having mentioned Blue Marble in the very first sentence of the book, he brings up the reproduction only after having talked in the interim about an explosion of youth across the planet, the vast increase in internet connectivity in recent years, climate change and selfies.

Looking back through these chapters, there are hints of the overall narrative running through them - it's just that you have to be paying close attention to find them:

"Now we are trained to pay attention to distractions..." (Chapter 2)
"All action must, to a certain extent, be planned in a twilight..." (Chapter 3)
"... the sit-ins created a link between what was sayable and what was visible..." (Chapter 5)

But I prefer to think that, rather than How to See the World being a somewhat incoherent embodiment of what I mistakenly thought would turn out to be an incoherent instruction, instead it's a disjointed text that's deliberately disjointed in order to give you a chance to practice the very skills the book informs you you are now going to need.
Posted by @CLANicholson at 14:42 No comments:

The start of something beautiful / disastrous

Yesterday I decided that my aim in life is to set up and run a publishing company.

You'd be forgiven for thinking there's more than a hint of midlife crisis about it, what with yesterday being New Year's Day and all, but it's also undeniable that I've been spinning my wheels for a while - see this post from October.

In retrospect it seems obvious. Just take a look at my bucket list, published on 30 December: number 14 is "run my own business", and 17 more of the 96 items relate to reading, publishing, writing or collaborating. Plus I've worked in journal / news publishing for nearly ten years now, and been interested in the written word since forever.

So, yesterday: the euphoria of inspiration and the end of uncertainty. Today: the nagging of doubt. But also determination and obstinacy.

This morning I tried visiting Ditto Press, an Islington-based outfit I heard about via Bertie Brandes and Charlotte Roberts, the founders and editors of the satirical fashion magazine Mushpit, at an event organised by Stack Magazines in December called Magazines for Good. Ditto prints a load of fun stuff, and I thought a visit could be instructive.

The shop was closed, however, so instead I went to the Whitechapel Galleries bookshop to scope out the future competition. This was probably a foolish thing to do, as the competition is lush, exciting and plentiful. This is a crowded marketplace full of passionate people. Eek.

Even though I've newly pledged that all of my disposable income will be ploughed into the business, I couldn't resist buying 10 Years in Art Publishing, a lovely little memoir of a decade in the industry from Lionel Bovier, co-founder of JRP Ringier.

One of the lessons in 10YAP comes in the form of an apparently classic joke:

How do you make a million in publishing?
By starting with three.

A disheartening message for someone wanting to carve a niche into the cliff face. Still, the fact that I couldn't resist buying the book reiterates one thing: books are my kryptonite, for better or worse.