Rachel Howard's painting Study, currently on display in London's Newport Street Gallery, is a rendition of the infamous photograph of Ali Shallal al-Quisi being tortured by US military personnel in Abu Ghraib prison in Iraq. 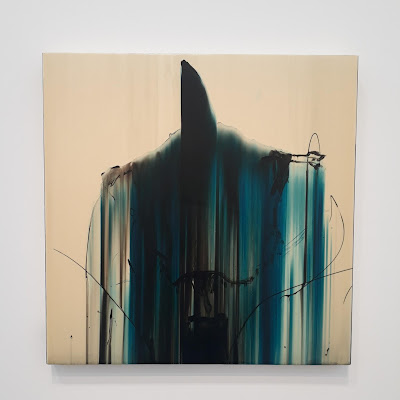 It's being exhibited alongside 14 other paintings, each of which was created by pouring paint and varnish down the canvas, to produce an effect similar to that used to reproduce al-Qaisi's robe in Study.

Those paintings are all mostly abstract, and might not have brought much to my mind. But because Study is figurative, and perhaps because I'd been prompted by TimeOut's review of the exhibition - opening sentence: "Humanity is capable of abominable acts of violence and degradation" - I found myself thinking of the runs of paint as representing humanity literally draining out of the world in response to the horror of the situation; colour and richness drawing away in abhorrence or despondence.

From that point of departure, the other paintings, despite their abstraction, can be seen as extensions of the first, if you choose to view them that way - as showing life in flight.

Probably that's not what Howard had in mind, but that was my take.

Posted by @CLANicholson at 11:03 No comments: 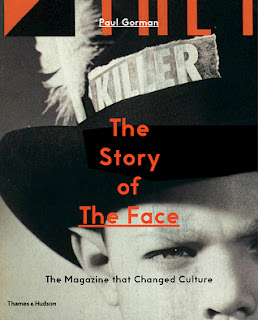 The Face was the coolest British magazine to garner a fairly large mainstream following, a feat that made it enormously influential not only in the publishing industry but also in fashion, design, photography and music. In this book, Gorman traces the history of the magazine from its establishment on a shoestring by founding editor Nick Logan in 1980 through to its peak at the height of Cool Britannia and its subsequent decline, sale and death after the turn of the millennium.

What comes across most strongly are the low-budget, small-scale, egalitarian, collegiate but perfectionist nature of the editorial office and how The Face changed the game with its insistence on great design alongside editorial standards and capturing the zeitgeist. It feels like Gorman had a good degree of access to the main players and materiel, not least Logan.

The book itself is high-end, with generous glossy reproductions of the magazine's covers and contents. At £35 it isn't quite as good value as say some Taschen books (it's published by Thames and Hudson), but it is a big, hefty bugger - and that's very much an asset, not a failing.

If it has slight shortcomings, they're that the focus is perhaps too much on The Face itself, when more attention to some of its competitors and stablemates - particularly in the photographs - would have been useful, and that in the later stages the telling becomes somewhat of a churn of barely identifiable editors and contributors. More photos and telling details of the cast might have helped there.

But ultimately the book is a treat: a lush, comprehensive encapsulation of what was so great about possibly the greatest British magazine. It feels not merely warranted, but necessary - and it almost lives up to the standards of the publication it eulogises. Almost.
Posted by @CLANicholson at 11:39 No comments:

Adults in the Room, economist-turned-politician Yanis Varoufakis's account of his attempts while Greek finance minister to get the country's creditors to agree to write off some of its debts in the aftermath of the global financial crisis, opens like a thriller. Although it then goes on to become a slightly overlong blow-by-blow account, it always maintains its grip on your interests, even though you know how things turned out.

You can understand why Varoufakis would have wanted to set the record straight with a microscopic account of the events given how he was maltreated by the media through the machinations of his political opponents, but the middle part of the book does drag slightly with the succession of meetings and papers.

On the other hand, how often do you get the chance to take a ringside seat at the eurogroup? Not very.

Among the major players, only Varoufakis and Emmanuel Macron emerge from the book with their reputations essentially intact. The Eurogroup itself, most of its member ministers, the media, the European Central Bank, the International Monetary Fund, the European Commission, Sigmar Gabriel, Wolfgang Schauble and even Angela Merkel all display varying degrees of incompetence, ineffectiveness, illogicality, callousness and foolishness, even allowing for some bias on the part of the author.

This is a sometimes-thrilling, ultimately depressing account of how governments and institutions can allow themselves to become trapped by circumstances, group-think, myopia and stubbornness. There are glimmers of hope for a better future, not least in Macron, but will those glimmers coalesce into a guiding light?
Posted by @CLANicholson at 10:59 No comments: