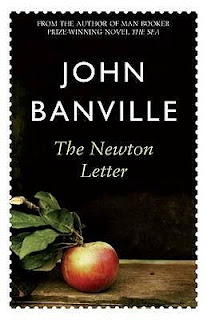 There are writers who are so good that I find it a relief to read their work, because my petty jealousies simply fall aside, like blades of grass before a Massey Ferguson.

Banville is one of them. He's a writer whose style is what I think of as writerly, a gobsmackingly inadequate term I know but one I haven't yet bettered. What I mean by it is that way certain writers have of trying to be, I guess, literary, by going overboard in selecting unusual words, overusing metaphor, or shoehorning in observations that could only be made by someone with too much time on their hands, and probably too big a trust fund (see what I mean by petty jealousies?).

But with Banville it's different, because although these elements are all present, they all serve the purpose they're supposed to, which is to describe or illuminate something better than any alternative could. I can best illustrate with a few examples:

'I could clearly hear the frequent cataclysms of the upstairs lavatory...'

'Receding from me, she took on the high definition of a figure seen through the wrong end of a telescope, fixed, tiny, complete in every detail.'

'It was an eighteenth century day, windswept and bright, the distances all small and sharply defined, as if painted on porcelain.'

'Is there anywhere more cloyingly intimate than the atmosphere of other people's bedrooms?'

Exquisite. Or so I think, anyway. If the above selections did nothing for you, then I wouldn't advise that you read The Newton Letter. Because for me it's a four-star book, but mostly because of Banville's way with words at the micro scale. At the macro scale I was disappointed that (I'm giving away no more than the blurb itself here) the protagonist fails to see what's under his nose as he bumbles along until the book is almost over, as for me this meant that themes were no more than hinted at, rather than being explored in depth.

I think that was even the intention: to tackle something obliquely and slightly, just glancing off it as a first pass, but personally I'm not sure there's much point in such an endeavour - or at least not if that pass is as oblique as it was here.

Nevertheless, I very much enjoyed Banville's deft treatment of this faintly Gothic short story.
Posted by @CLANicholson at 09:48