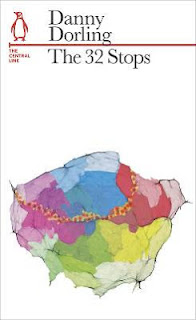 This is the second of the two books I bought from Penguin's set of twelve celebrating 150 years of London Underground. They're pretty little things. The other one I bought was A History of Captalism According to the Jubilee Line, which I very much enjoyed.

The 32 Stops is based around an unusual concept. Dorling takes you on a journey from west to east along the Central Line, but without actually descending underground; instead he character-hops a waking day at half-hourly intervals, giving you a few minutes with each person.

This he does using a wealth of real-life sources and statistics to present a snapshot of what life is actually like for people living beside that part of the Line. It's fact-based fiction as social commentary, played out along one of the city's main arteries.

It's an ingenious way of communicating a selection of socioeconomic statistics. I like a good geek out as much as the next blogger, but this is the first time I've ever put a book on this sort of stuff to the top of my reading list. A clever ploy.

And Dorling does a surprisingly good job of giving each new character or set of characters fairly unique circumstances. He is a Professor after all, not a novelist, and his characterisation is admirable, even if the writing itself is just a touch clunky at times.

It does get a little bit samey after a while though, as each inhabitation is too brief to delve deeply into the individual's circumstances. Wisely there's a non-fictional recap every four stops or so to tie together the disparate tales into a coherent thread, but it's still only a surface glimpse of the different layers.

Another minor complaint is that I found Dorling's politics took ever so slightly too forward a seat: the characters on the less enviable sides of the median lines are much more sympathetic than those on the other sides. That might be inevitable - I don't know how I would go about instilling sympathy for a dozen different well-to-do characters; you can't give them all cancer - but it was a weakness for me all the same.

(I suppose it's predictable that Dorling would be a lefty.  I wonder whether there are any conservative 'quantitative social geographers' out there?)

It's also a surprisingly depressing read. Real life, with its massive inequality and commonplace deprivation, dictates that many of the characters will be in difficult circumstances, but the bleakness is fairly unrelenting. Dorling also adds a further layer of complexity to the book by incrementally increasing the characters' age at each stop, so that a lifetime as well as a day is experienced across the journey as a whole. Although this is again ingenious, it amounts to an inexorable ride towards death through a multitude of lives filled with little more than constant worries about money and children. That is, it's a bit too realistic to be enjoyable as well as informative.

Still, overall The 32 Stops is an impressive accomplishment, and a credit to Penguin's bravery and powers of selection.

As I said, it's a lovely volume, but in case you don't like to fill your shelves with things both lovely and edifying, the thorough and at times rather witty notes include a link to a website currently under construction that looks as though it will soon provide an equivalent experience online. It too is already looking very snazzy:

I think I might buy more of the books though, personally.
Posted by @CLANicholson at 12:53