The death of Tolstoy: a short review of Anna Karenina 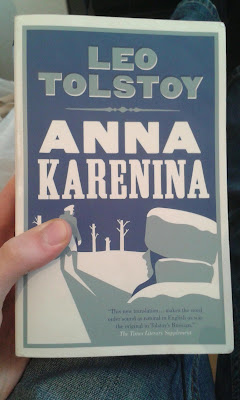 The idea that Tolstoy is one of the greatest novelists really must be put to bed.

Henry James called the novels of Tolstoy and Dostoevsky "loose, baggy monsters", and in Tolstoy's case that's the verdict that should stick.

It's not that Anna Karenina is all bad, it's that the juice is far from worth the squeeze.

The highlight is that there's a decent amount of complexity and variety in the characters - not shovel-loads, but a decent amount. Characters in AK are frustrating, and you root for them as they bumble around screwing things up. And Tolstoy is also very good at describing scenes of country life, like horse racing and farming, about which he was obviously knowledgeable.

But his sentence construction is fairly pedestrian, he includes too much and, worst of all, he's an excessive and blatant moraliser. In practically every chapter you can feel Tolstoy prodding you in the ribs and going "Now isn't this a foolish / the correct thing for the character to be doing?"

The message of AK can essentially be summarised in the following extract:

Which is fine, but later on we have this nonsense, written without irony:

"What would I have been and how would I have spent my life if I had not had those beliefs, if I had not known that one must live for God and not for the satisfaction of one's needs? I should have robbed, lied, murdered."

No, Tolstoy, because EMPATHY.

I can only assume that Tolstoy's reputation is propped up by people of faith who like having that reinforced. It wouldn't bother me, but I only soldiered on with AK because of Tolstoy's standing; I felt I had to read at least one of his two tomes. Well, perhaps I'd have fared better with War and Peace, but I'm going to give it at least 20 years before finding out.

Oh, James was wrong about Dostoevsky, btw: Crime and Punishment is great.
Posted by @CLANicholson at 08:06