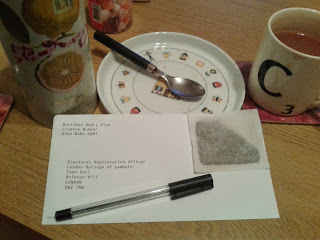 I don't know about you, but when I lift the lid on a new box of tea, it feels a bit like opening a casket of treasure. All those little parcels of promised satisfaction, stacked all neat and tidy right up to the brim... It makes you want to give a last-sip-drained "Ahhh..." just thinking about it. Well, it does me.

Which is probably why I was so intrigued when I recently came across the concept of The Tea Incentive. (Those capitals are mine: I don't think anyone who actually uses TTI finds it quite worth proper-nounising or acronymising as I do.)

I was soldiering away at work, writing up a summary of a research paper, when I stumbled across TTI. The paper was O'Connor et al's 'Community pharmacists' attitudes toward palliative care: an Australian nationwide survey'. For the purposes of this blog, the important part of the paper is the following innocuous-looking line:

'The survey-packs were addressed to ‘The Community Pharmacist’ and included a cover letter, information sheet, the survey, a tea bag, and a reply-paid envelope.'

Excuse me? (*Splutter as though tea is going down the wrong way.*) A tea bag?

Could the glorious thing I suspected be true? No further explanation was given in the paper, so I immediately ceased summarising and Googled something like "tea bag incentive surveys". It turned out I was right, this was indeed A Thing.

Having since done some additional research (on my own dime), the origin of The Tea Incentive (I think I prefer the term in full, it has more grandeur) seems to be a 1996 study by one Anne-Wil Harzing, now Professor in International Management and Associate Dean of Research at the University of Melbourne, Australia.

The study in question was reported in the following paper 'Response rates in international mail surveys: results of a 22-country study'. This study was part of Professor Harzing's work towards her doctorate. She wanted to fill in some of the large gaps in our knowledge around what affects mail survey response rates, and carried out a number of different experiments.

The part we care about reads as follows:

'After considering a number of options, varying from money and electronic organisers to flower seeds, a small non-monetary incentive was included: a bag of Pickwick tea for one. This tea bag was attached to the cover letter next to a PS: "Why don't you take a short break, have a cup of tea and fill out the questionnaire right now, it will only take 10-15 minutes." This incentive was hypothesised to catch the addressee's attention, prevent the questionnaire from being thrown away immediately, bring the respondent in a pleasant mood and emphasise that it would not take too much time to fill out the questionnaire (just the time to drink a cup of tea).'

How lovely is that?! 'I need a favour, please, but here: have a cuppa on me.' It must have been like getting a warm smile through the mailbox.

Now, Professor Harzing wasn't trying to find out whether The Tea Incentive worked, so she didn't compare it with anything else. But if I was finding it in a paper from 2013, then clearly her idea must have caught on...

The next study I can find that adopted The Tea Incentive is reported in Brennan et al's 1998 paper 'The tea bag experiment: more evidence on incentives in mail surveys'. Unfortunately I don't have a subscription to the International Journal of Market Research, and the paper doesn't seem to be available for single purchase. However, the article abstract does tell us the following:

'This paper reports the results of a study which compared the effectiveness of a tea bag and a $1 coin as prepaid incentives in a mail survey of the general public. The tea bag had no effect on response rate but the dollar coin produced a significant increase in response of more than 7%, confiming the efficacy of this type of incentive.'

Is this the end for The Tea Incentive? Did O'Connor et al waste their time and their tea in their recent paper? Was Professor Harzing's pleasure package misbrewed?

'However, these particular tea bags were of high quality and very attractive, as well as being convenient to use.'

One wonders what shabby, impossible-to-access tea bags were used in the Brennan et al paper.

Anyway, Gendall et al found that the stamps and small chocolate coins increased the response rate by around 4-5% relative to control, whereas the large coins and the very attractive tea bags had no effect. And only the small coins were cost-effective.

Perhaps not: it turns out that the failure of the tea bags may have been purely the fault of men over the age of 55. Gendall et al don't go into statistical specifics, but they do say:

'Among respondents under 55, tea bags were the second most effective incentive after the gold coins but, as a result of the poor response to this incentive among older males, the tea bag treatment actually performed worse than the control among respondents over 55.'

Let me repeat that: 'the tea bag treatment actually performed worse than the control among [male] respondents over 55.'

What is it about tea bags that angers older males?!

Wait, perhaps I'm being too hasty. Perhaps the older males got so excited and distracted by the lovely free tea that they forgot all about the survey? Or perhaps a lot of them got chocolate from, say, some tea-dipped choccy digestives all over their fingers and then all over the survey, and then felt too embarrassed to return the survey all covered with gooey smudges?

Whatever the explanation for this age-and-gender anomaly, the overall picture now seems clear: everyone except perhaps men over 55 loves to get a free tea bag in the mail. Of course they do!

Strangely, all of these studies were conducted by Antipodeans (from a British perspective) - not the first people I think of when I think of tea drinkers.

Well, that's that. Someone put the kettle on - I think I hear the postman calling...