Travelling with a Child

What to do when you face a 5-hour wait in Prague airport, a 2-hour flight, a 1-hour train journey and a 1-hour bus journey, all of it without reading matter?

Well you buy more reading matter of course, but Prague airport has rather limited options.

I could have bought a second copy of the book sitting shiny and new back in my flat awaiting my attention, Nate Silver's The Signal and The Noise, but I didn't really want to waste a tenner.

I could have bought Nassim Taleb's Antifragile, but given that his LSE talk on it was about 98% bluster,  it didn't really appeal.

The only other non-fiction option was Jeremy Paxman's Empire, complete with a cover that looked like it was printed back when Britain still dominated most of the planet. I came very close.

There was also a selection of Kafka, the Czech Republic's most famous son...

But I needed something I could read for 9 straight hours without becoming saturated and tired. I needed a thriller. I needed a book with Tom Cruise's face on the cover: 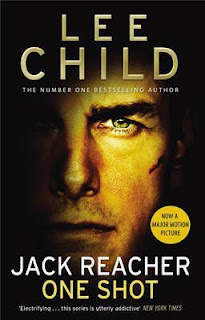 The opening pages of One Shot were not promising, but by the time the plot hit its hook (an apparently nailed-on mass murderer says nothing when caught except to ask for ... Jack Reacher!), I'd settled into Child's rhythm and was no longer looking out for literary inadequacies, but just enjoying the unfolding of events.

Some of the finer points did strike me as rather weak, though - generally points where things came to a head or the action needed progressing. I found some of the moments of conflict and resolution a bit of a let down, or a bit of a stretch.

But I thought the greatest weakness of the book was the main character's lack of it. I want two things from a thriller at minimum: a decent plot and decent characters. Literary skill would be nice but is not essential or expected.

One Shot features some fairly interesting bad guys, but I was surprised at the shallowness of the main character. I think One Shot, despite being the first Reacher novel to be made into a film, is not the first Reacher novel, which might go someway to explaining why it provides little in the way of backstory or outlook. But more of both would have been welcome.

In addition, I wasn't that impressed with Reacher's "special powers", if you get me. The stuff that makes him different from you or I, and worth sticking on a poster or 12. Yes he's a very astute investigator, but when it comes to the physical stuff he's basically just a very big guy. He gets his way simply by punching people in the face, or throwing them out of windows, or simply intimidating them. Finess is not the order of the day.

I wonder how Reacher is portrayed in the film, given that the character of the book is a 6'6" monster who bear hugs people to death, and Tom Cruise is about 5'7". Presumably he's some sort of martial arts specialist, which although very tired would at least make for more interesting reading than Me Hulk, Me Smash.

I have to give Child his due though: he kept me reading and entertained for the full 9 hours. In fact he surpassed that, because I still had 70 pages left to read when I got home, and rather than binning the book or setting it aside, after I'd eaten and showered I ploughed right on through. I didn't think an awful lot of those pages - the climax was the most anticlimactic part of all - but I stuck with them all the same, and then the day was done.

One last thing. One Shot reminded me quite substantially of another book published 9 years earlier: Stephen Hunter's Black Light. I'm not accusing anyone of plagiarism - it's not that similar and I also don't know when the first Reacher book was written - I mention it only because I thought Black Light had more depth than One Shot and a more interesting and impressive main character than Jack Reacher. So anyone reading this who likes Child and Reacher would do well to check out Hunter.

For me, spending one day with a Child was nice, but enough for now, thank you.
Posted by @CLANicholson at 05:38