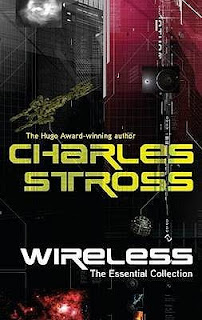 More struggling with short stories on my part. Actually I'm struggling with all fiction at the moment. Of the ten books I read before Wireless, only 1 was fiction, and that was a holiday read.

I finished Wireless impressed with Stross, but not particularly impressed with the collection. I've now read a few of Stross's blog posts and I'm currently following him on Twitter, and I like the guy. He's clearly very smart, and that's evident from the stories themselves too. But I didn't get much out of some of them.

My favourite was Unwirer, written with Cory Doctorow. It's alt-history cyberpunk, and it's probably the most straightforwardly written of the bunch. It's one of those fictions that manages to convince you you're cool while you're reading it and smarter for doing so, even though in reality you're borderline useless.

Missile Gap, A Colder War, Down on the Farm and Palimpsest all have good stuff going for them - some combination of a great concept, extraordinary inventiveness, impressive scope, and Stross's way with telling, but also suffer from some combination of being tediously complex/obscure, having little characterisation, being too long and running out of steam, or being too short to fully develop.

The other four stories did nothing for me, and Trunk and Disorderly in particular was abject.

Throughout I kept thinking that I'd get on better with full-length Stross, and I finished with that same thought. I'd have to be selective about what I chose though, as some of the afterwords to the stories hint that a few of Stross's longer works might also entail some of the things that annoyed me here.

I actually found most of the afterwords more interesting than the stories themselves. There I go again, struggling with fiction.
Posted by @CLANicholson at 09:22