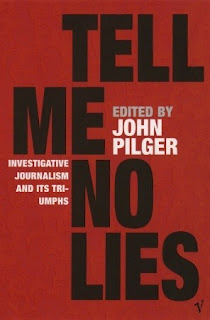 Tell Me No Lies is subtitled 'Investigative journalism and its triumphs'. A more accurate although less sellable subtitle would be 'Stuff investigative journalism has uncovered', as the book is not about journalism or how it is carried out, but instead provides 27 examples of journalism's output in the form of book excerpts and articles, plus very brief introductions by the compiler, John Pilger.

This is not a book that affirm's one's faith in humanity. If an event must be investigated to be uncovered, chances are that atrocities or outrages are involved. Of the 27 accounts and 1 essay presented, around 20 deal with wars, massacres, terrorism or their effects. And even some of the other accounts are little or no less gut-wrenching.

One would expert reports of massacres to make for difficult reading, and one would be right. Yet it is often the individual stories or elements that are the most affecting, from mothers in Rwanda being forced to bury their children alive, to the budding child poet in Iraq, born the same year that I was but hospitalised with leukaemia at the opening of the reporter's story, just one of the victims of a reported 6-fold increase in childhood cancers in Iraq in the wake of the 1991 Gulf war, and who then dies at the age of 13. Or try reading about a severely disabled victim of thalidomide being kicked and beaten by other victims because of the greater size of his financial compensation without wanting the whole world to just go away for a while. And this after reading of mothers not being informed of their babies' thalidomide deformities while in the hospital, but being sent home with swaddled children and left to make the discoveries for themselves... Yeah.

Governments, in particular, do not emerge well from these pages. For example, call me hopelessly naive, but as a Brit approaching the end of his third decade who until recently had read voluminously but narrowly of only fiction and science, I had little idea that the actions of British Governments had been any cause for concern post imperialism, slavery, colonialism and Dresden up until the 2003 invasion of Iraq. Tell Me No Lies disavowed me of that ignorance. Nor had secondary-school history and 30-odd years of generally existing and consuming mainstream media given me even a ballpark comprehension of just how central the Cold War was to international relations during the entire period from the end of WWII to 1991. I thought it was mostly just the USA and Russia eyeballing each other and nearly losing all of our heads over Cuba.

I like to think that some of these failings are not entirely my own. For all of the Western World's 24-hour rolling news and minute-by-minute updates, there is a glaring lack of in-depth analysis taking into account and informing readers/viewers/listeners of historical context - an issue Pilger addresses in his introduction.

The book itself does not fill this gap. It is not a full and even-handed accounting of events, but rather a brief glimpse of the other halves of stories whose incompleteness you may not even have suspected. I for one would have benefited greatly from more extended scene-setting for each report, rather than the page or so of context actually provided. But in fairness it is not the book's aim to provide encyclopaedic accounts of entire events.

I asked in a previous post for recommendations of books that address the issue of the extent to which a country's leaders should lie to its populace if it's in the country's best interests, and I repeat that request here. There is also a wider debate to be had about the extent to which governments should be accountable to the views of their electorate and transparent in their actions. For example, is it acceptable to use more effective depleted uranium munitions which are safer for those behind them if there are questions over the safety of their fallout for civilians on the receiving end? How does ensuring the future ability of interveners to go on intervening stack up against the current tolls of those needing help? (Making the enormous assumption that the intervention is even well-intentioned in the first place.)

The book is not all hard going. Jessica Mitford's exposé of the US funeral business is bitingly witty, and Greg Palast's accounts of the removal of thousands of legitimate voters from the Florida electoral roll in 2000 has old-school panache and is probably the most revealing chapter in terms of how the investigation actually proceeded.

Also, I said at the start that Tell Me No Lies does not affirm one's faith in humanity. However, that's not quite the full story.

First, although the vast majority of the people in the book are either perpetrators or innocent victims of horrendous deeds, there are some individuals who stand out for their principled stances against the horror.

Brigadier-General Roméo A. Dallaire, commander of the UN mission in Rwanda, repeatedly refused orders to abandon the Tutsis completely to their slaughter by evacuating his peacekeepers in 1994. Chief Warrant Officer Hugh C Thompson physically interposed himself between his rampaging superiors and a huddle of unarmed Vietnamese civilians during the My Lai massacre of 1970, later throwing away a commendation that had sought to extend the coverup by citing him for fictional deeds as opposed to his genuine heroism.

And then there are the journalists themselves, many of whom put their lives on the line to reveal to the world appalling facts that would otherwise have remained hidden.

But beyond individual acts at the time, there is another faint glimmer of hope. If you can read about someone's suffering decades later and from another continent and still feel outraged and sickened, even if it's far too late to do anything, maybe there is a chance that our shared human bond, although often all-too-easily snapped, will be strong enough to make a difference next time, provided that we're sufficiently informed in time. Maybe.
Posted by @CLANicholson at 06:30