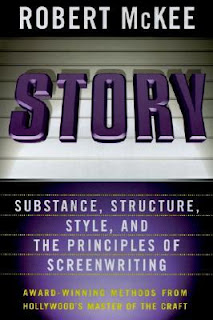 I'm often not the most perceptive person. For example, I managed to watch a film I like about half a dozen times without realising that one of the main characters kills himself. I probably would never have realised if my friend hadn't said to me, "Isn't it sad when..."

Which is why I wish I'd found Story 10 years ago. I've harboured the desire to write, on and off, pretty much ever since I learned to read, but aside from enjoying Stephen King's On Writing and, more recently, bookmarking useful websites that have reached me via Twitter, I haven't made the effort to get to grips with the craft of the process. I'm not sure why. I think fear plays a large part, but I need to give it more honest thought.

Anyway, Story is about the most instructive thing I've ever read. I may never successfully write anything, but I feel like I've taken about 12 gigantic leaps forward for having read this book. Going back to what I said at the start, I think I could have read books and watched films and TV forever without ever having come to such now-simple-seeming realisations as that the nature of the protagnist's conflict determines the medium for which the story is best suited.

For the ignorant like me, Story is packed with gems such as this.

Not only that, but McKee makes for a very entertaining, interesting and amiable teacher, so reading Story never feels like ploughing through a textbook. Instead, I wanted to reach for it as often as a good murder mystery, and it was only the frequency with which my mind was blown by the density of insight that made me put the book back down for a while every 20 pages or so.

I was in two minds whether to recommend the book or not, because the petty, jealous part of me thinks that the fewer people who know this stuff, the less competition there will be if I ever get my act together. But McKee deserves better thanks than that.

So thank you, Robert, very much.
Posted by @CLANicholson at 03:42