Get The Most Out Of Your Brain

How can you wring the most out of your sorry excuse for a brain? That poor, poor organ you won't stop dousing in alcohol for more than 19 hours at a time?

Lend it to someone else, that's what!

That's what I did back in 2010, when I answered an ad in the Guardian jobs listing looking for volunteers to take part in an MRI study in exchange for photos of my brain.

I'm an adverturous sort, if the adventure involves staying inside and lying down, as well as a bit of a neuro geek, and so I thought I'd give it a go.

Why am I telling you this now?

Because today I received an email from the person who led the study, one Emer J Hughes, who very kindly sent me a PDF of the first paper to emerge from it: 'Regional Changes in Thalamic Shape and Volume with Increasing Age', published in NeuroImage.

The study found that the thalamus, the part of the brain that as Hughes says in her introduction 'plays a critical role in the coordination of information flow in the brain, mediating communication and integrating many processes including memory, attention, and perception', decreases in volume with age, as do its connections with the frontal cortex, and that these changes correlate with decreases in attention, working memory and executive function.

So, basically, age-related mental decline may be partly due to weakened connections between certain parts of the brain.

As far as my own part in the study goes, I remember being told (after the tests were over) that I'd done remarkably well at remembering long strings of numbers and then recounting them back in reverse order. I would be concerned that my supremacy at this feat might have single-handedly skewed the results, except that I was also completely inept at mentally rotating 3D images, and even worse at thinking of words beginning with a certain letter under pressure of time constraints.

The process of being MRI scanned was also fun, although I suffered fairly extreme vertigo once the machine got going, and had to fight mightily not to fall asleep.

Part of the scanning also involved undertaking tests of reaction time while in the machine, via a very basic visual display and some hand-held triggers, and even though I knew from my work that the test was designed to frustrate, I still felt terribly guilty that I wasn't able to do the impossible feat I was being instructed to do. Would the whole study fall apart because I couldn't fire off buttons fast enough?

And what of my scan? Take a gander: 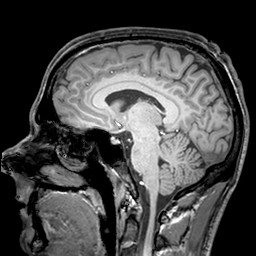 In conclusion: taking part in research is fun! Oh, and something about ageing.