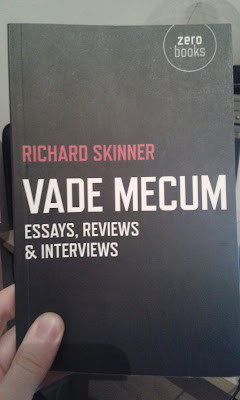 A vade mecum, the final few lines of Vade Mecum tell us, is a "guide or handbook, kept close at all times and used for instruction". I wouldn't go as far as keeping VM with me at all times, but I did take it away with me on a long weekend, and I do intend to keep it within handy reach for a while now that I'm back home, even though I've finished it. Why? Well, the main thing it has going for it is that it's a slim but dense source of things that sound interesting and that I want to check out...

This will be easiest for music, in this age of Spotify: there's a 12-page essay on dub as a musical style, for example - the longest entry in the book - and I want to listen to pretty much every musician and track mentioned in it.

Then there's the entry that consists solely of a list of moments / aspects from films, without any explanation of what they have in common. They're obviously bits Skinner likes / attributes something to, but why / what? Some explanation would have been nice actually, but you get the gist: the films are worth seeing.

I love collections of criticism and comment that span different media, and VM is a worthy addition to the likes of Adair's Surfing the Zeitgeist and Hitchen's Arguably. It's not quite on the same level, but it's a denser source of promising trails to follow, and well worth keeping close to hand for that reason alone.