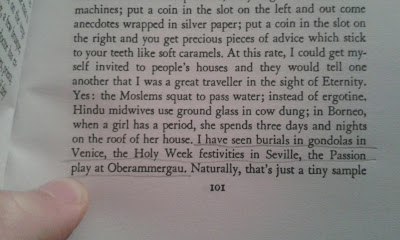 The above is from Sartre's Nausea. Inspiration for the Tears in Rain speech in Bladerunner?

"I've seen things you people wouldn't believe. Attack ships on fire off the shoulder of Orion. I watched C-beams glitter in the dark near the Tannhäuser Gate. All those moments will be lost in time, like tears...in...rain. Time to die."

A stretch, perhaps. But how's this: Wikipedia says Rutger Hauer changed and shortened his lines in the take that was used without telling Ridley Scott what he was going to do; the original wording of the speech, it says, was supposed to begin with "I have known adventures...."

So? Earlier in Nausea, the narrator spends several pages musing on the nature of adventures and whether his life has or hasn't contained any...
Posted by @CLANicholson at 13:19