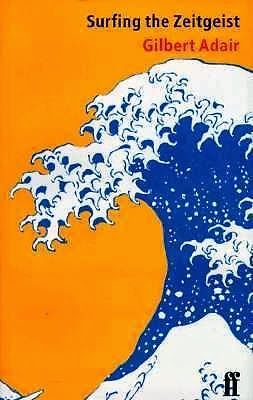 In reviewing a book of cultural criticism, one aspires to at least equal the incisiveness and brilliance of the book itself. However, none of the items in Surfing the Zeitgeist, if I remember rightly, is anything so lowly as a mere review - they're all broader-reaching essays that comment on some aspect of culture, albeit in doing so they might praise or criticise some work or other.

Hence to equal or even approach the standard of StZ, I would need to scrape from my brain something that could reach beyond the covers of the book itself... And I cannot.

Fortunately, I don't really intend to criticise StZ, and so I have no need to prove myself better than it.

These essays were written between 1995 and 1997, and despite Adair's intention being to surf the zeitgeist, for the most part they've aged well. Few if any of the people of the 90s who are named don't remain immediately recollectable (or even still part of the zeitgeist) today - Arnold Schwarzennegger, Naomi Campbell, Martin Amis, Will Self, Danny Boyle - and many of the people from earlier times remain relevant, although I'm less qualified to judge those references.

Few of the essays struck me as essential, but one - "On actemes" - I was moved to attempt to find online (unsuccessfully) so that I might share it with the wider world. I would be grateful to have read StZ if only for having gained the notion of actemes - I won't steal Adair's thunder by explaining precisely what one is, but I will tease you by proposing a couple of modern candidates (time will tell): Bryan Cranston's goateed face; Chloe Moretz dropping the C-bomb.

However, only a few struck me as being not worthwhile. I said I wasn't going to criticise StZ, but I do have two small complaints, both of which arise from the origins of the essays as newspaper columns. First, as Adair himself acknowledges in - fittingly - one of the least worthwhile essays of the collection, newspaper columnists are under pressure to deliver insight with a regularity we have no right to demand of anyone: "Week after week, month after month, he must come up with a brand new tale to divert the Caliph", and therefore they can't help but fail occasionally. In this particular essay, Adair goes on to talk about ... sweets. In others he discusses the craftsmanship behind sporting equipment and, er, how he came to watch and quite like Groundhog Day.

My second (related) gripe is that newspaper columns are always the same length, and so an idea that might be diverting enough for 400 words has to be wearisomely dragged out for the full thousand or whatever. (See essays on pedantry, pop music, Wallace and Gromit.) Conversely, ideas that might have happily entertained one for a whole book must be lopped off at the knee.

In general I found at least one nugget of nourishment buried in each essay, and more often I found more than that. For a poor capstan-chained Scheherazade of a newspaper columnist, 40-odd nuggets of wisdom across 3 years is really quite impressive.
Posted by @CLANicholson at 14:54