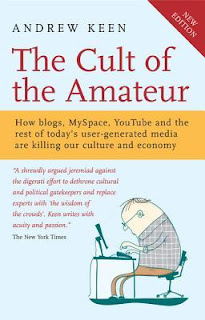 I suspected The Cult of the Amateur might be pretty dated, despite the 'new edition' flash on the cover of the edition I bought (see pic), but I'd been browsing for a long time and was getting tired, and I was swayed by the high praise quoted.

My suspicions proved correct. However, that's a minor annoyance - places should stop stocking this book now, but most of the fault lies with me for not sampling it more thoroughly before buying it. What's more annoying is that the book is misleadingly titled and subtitled, regardless of when it was written.

That is, much of TCA is actually not about user-generated media at all, but just about the internet in general circa 2007. Substantial portions of the book are about regulating the internet for the sake of public safety, touching on online gambling, identity theft, and pornography, and placing the blame on governments and corporations as opposed to amateurs in any sense. All well and good, but not what was promised.

To return to the book's datedness, it's not just that the world has moved on - the edition I read is also self-defeating twice over. The first 7 chapters set out some problems with the internet circa 2007. Then chapter 8, called 'Solutions', presents various reasons why some of the foregoing problems are actually not all that bothersome after all, citing a number of websites, companies and initiatives that had already begun tackling some of the issues. This is no in-depth analysis or considered forecast, but just a few snapshots that undermine much of what has gone before. And then, a new chapter to the edition, titled 'Web 3.0', adds that actually much of those initiatives listed in chapter 8 failed to live up to expectations.

It's sheer laziness and dishonesty. A more scrupulous author and publisher putting out a 'new edition' would have thoroughly revised the entire book - if not reworking the whole thing, then at least taking out the dead ends and making the whole internally coherent.

And when it isn't hopelessly archaic or off-topic, TCA is often annoying for some other reason instead. I folded over the page every time I came across something that was either dated, off-topic, or that just got my goat, and this is how my copy ended up looking: 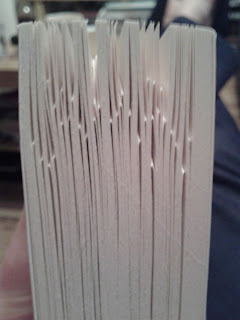 Perhaps the most irritating aspect of the book is that Keen did a reasonable job some of the time - being quite readable in the section on the death of music stores, very sensible in the section on safeguarding children, and I think impressively prescient in picking up on the economic/employment costs of the media revolution. Unfortunately he spread himself too thinly, chose some of his targets unwisely, and became too hysterical in screaming about the slaughtering of culture and values. And he should have picked a more accurate title, damnit.

This is a book that should be put out to pasture. I haven't read them yet, but recent books by Evgeny Morozov and Jaron Lanier have looked at the issues of technological blinkeredness and technology causing instability, respectively. Whether there is actually an up-to-date, well written, well researched, intellectually rigourous book on the effect of amateur content generation on our culture, I don't know. I do know that TCA isn't it.

The irony is that if I'd have thought to check Goodreads before buying TCA, I'd have seen that it has an average rating - from those dreadful amateur critics - of just 2.73 out of 5, and I probably would have put it back on the shelf. Would that have been an example of amateurs 'killing the culture' or 'assaulting the economy', or would it have been amateurs helping me to spend both my money and my time more wisely? YOU decide.
Posted by @CLANicholson at 08:32