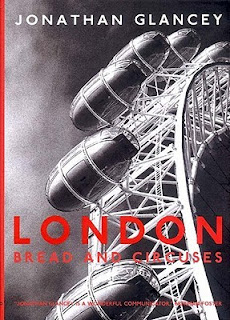 It was interesting to read this book 12 years on from its first publication, but difficult for me fully evaluate it. It seems very much of its time with its frequent references to New Labour and Ken Livingston, now that Cameron and Boris are so firmly associated with current British and London politics. Also, I only moved to London in 2007, which leaves a 6-year gap between the book's contents and my beginning to pay attention to London life.

However, I feel I can quite safely say that it's not without its flaws. It's central premise - that New Labour distracted Londoners from their problems with baubles like the Tate Modern and the Millenium Dome and Bridge - may have had some grounding in truth, but Glancey doesn't make his case very well. It doesn't help that he seems to have a lot of liking for many of the eight such 'circuses' he highlights. One - the Canary Wharf underground station - he even finds to be an example of the well-designed public infrastructure projects that his book is a plea for: he pays homage to its "bravura, technical excellence and generosity". Elsewhere, the Royal Opera House revamp results in "a very gentle sequence of buildings knitted together to form a coherent whole", and the London Eye "offers millions of people the chance not just to see the sights, but to understand the ways in which London has grown and sprawled".

In addition, at times I struggled to pinpoint exactly those parts of the modern way of doing things that Glancey disliked, or what period or facets of the past he would like to return to. By the end of the book I'd come to appreciate that he has a fondness for the period from roughly 1930-1965, and for nationalised services, but the structure of his argument was not altogether coherent.

Finally in terms of negatives, Glancy struck me as being more than a little curmudgeonly in his fondness for the past and his dislike of the present: he dwelt overlong on good-old British-made buses for my interest - not surprising from someone who as a boy spent his time colouring in the streets of his London AZ blue if he'd walked them and red if he'd ridden a bus through them - and he seemed to have a bizarre aversion to sushi.

However, I also found much to like in this little book. For the most part it is very informative, interesting, and entertaining. Glancey includes some great stories from history, such as of the caretaker of St-Giles-without-Cripplegate exhuming the corpse of John Milton and charging members of the public to gawp. And he is at times very witty - "Want to make a crust? Why not dig up John Milton's corpse and show it about a bit?" - as well as eloquent - "From the top of the bar in Tower 42, you can't quite see to Russia, and you can't really see Spitalfields below you, but you can see across to the dark, winding ribbon of the Lea Valley. Fingers crossed that it doesn't light up with yet more finance industry guff..."

Also, the book boasts some great photos, especially considering it only cost me £7. One of the 1951 Festival of Britain is a particular highlight, but there's also one of the bust of Lenin that briefly adorned Finsbury, one of the Eye being lifted into position, and many more.

Overall, I enjoyed the book but wish it had been written in 2011 not 2001. I haven't looked up where Glancey can be found these days, but I will do so, and if he's still plying his trade I might well seek out more recent examples of his work.
Posted by @CLANicholson at 06:45